It is naughty & generally a bad idea to isten to rumours but around September 2014 & again early January 2015 you may have heard that Microsoft was developing a new browser with the code name Project Spartan.

However it wasnt until 21st of January 2015 at a Windows 10 preview event that Microsoft confirmed the existence of this browser and gave us our first peek.

Oooo but most importantly what does it look like?

Well we can’t get our hands on it yet so we are reliant on demos and Microsoft blog articles. Here is a picture I have taken from the IE blog of Project Spartan’s UI to give you some idea:

Tell me about the new features in Project Spartan..

Well it is still very much in development but here is a summary of some of the new features we know about so far compiled from various blogs, the Window 10 video and tweets from IEDevChat: 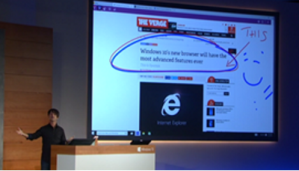 Spartan sounds interesting how can I play with it now?

Not quite. You can’t quite yet play with the new UI/annotation features as they are still cooking but you can see the new rendering engine in action by downloading a preview of Windows 10 at http://blogs.windows.com/bloggingwindows/2015/01/23/january-build-now-available-to-the-windows-insider-program/ & enabling Edge mode by opening up the browser and going to about:flags.

So is this the end for IE?

Jacob Rossi says “Spartan is the browser we expect people will be using on Windows 10”.

So for the majority of consumers in the future er kinda yes..

However this is not the full story.

Before I answer this we need to understand that browsers are actually made up of many individual components and subsystems. In fact it’s probably better if you head over to the IE blog here and you can learn all about what makes up Internet Explorer from the people that actually create this stuff – go on i’ll wait.

Internet Explorer in its rendering related system(s) contains a huge amount of code dedicated to providing support for legacy versions of IE all the way right back to IE 5.5.

As you can imagine maintaining this became a bit painful (and does anyone really need support for weird IE5.5 rendering issues – no you don’t) & can slow progress. With Spartan Microsoft decided to draw a line in the sand and based Spartan’s rendering engine on IE11’s standards support and went to work throwing out the older legacy rendering stuff (and a few other items such as vbscript that no one not even its mother will miss).

So in short Spartan is built upon the rendering & JavaScript engine of IE11 (and I guess some other components) but without the old legacy stuff.

The result is a great standards compliant platform with an awesome JavaScript engine to build upon going forwards. Microsoft are referring to this new rendering engine as EdgeHtml.dll.

But what about backwards compatibility? glad you asked let me tell you about Spartan’s dual engine mode..

I work for a bank/government agency and am worried about backwards compatibility!

To support legacy applications Spartan operates in dual engine mode and transparently switches (it is unclear what triggers this) between using the new engine & the old Trident/MSHTML engine for legacy sites.

Internet Explorer will also be made available on Windows 10 to support those guys that have built applications on top of IE’s extensibility models toolbars/ActiveX etc (you poor brave fools!).

It looks like it is still to be decided if IE will be hidden away in order to encourage Win 10 users to move to Spartan. For example in a reply to a tweet regarding if IE will be part of Windows 10 @IEDevChat replies that “We’re evaluating different approaches, but our intent is for ppl to use Spartan unless they have specific compat needs”.

Can you force EdgeHTML rendering on intranet sites?

Yes. “You can get EdgeHTML on intranet using x-ua-compatible if intranet sites are set to use compat view.”

Why can’t Spartan/IE just use WebKit/Blink as its rendering engine – my life would be much easier?

Well maybe but having no completion/a mono culture is a very bad thing for a number of reasons.

Christian Heilmann (probably best known for his work at Mozilla but now working for Microsoft) answered a comment on Jacobs article similar to this with:

“The fact of the matter is that in order to have a standards based web, we have to have different browser engines to test standard proposals against. Having a WebKit only web would be as disastrous as having an IE6 only web or a Gecko-only web. Any engine that has no competition will deteriorate over time – no matter if it is open or closed.”

And I would certainly agree – competition and different is good and drives the web forward & stops one organisation having control over the webs direction.

Which operating systems can I use Spartan on?

Initially Windows 10 & Windows Phone 10. Remember that Win 7 updwards users will be able to upgrade to Windows 10 for free so there is really no excuse unless perhaps you are in Corporate world. Microsoft said regarding potential cross platform support in the future: “No current plans, we’re focused on making it great for Win10.”  and “Spartan is currently targeted at Win10. We’re focused on getting ppl upgraded (free) but will watch Win7 demand”

Will Spartan use vendor prefixes?

It will likely still contain some but these will be discouraged. “EdgeHTML engine will have a lot of ms prefixes removed; we want to use prefixes very sparingly if ever”.

Were there perf gains from removing the old rendering stuff?

“Yes. The disk size of the engine itself is decreasing and general web page performance has improved by various metrics, including JS perf. Preview builds are notoriously not our best foot forward with perf though, but you should see good things already and we’re not done yet.” Jacob Rossi comment http://www.smashingmagazine.com/2015/01/26/inside-microsofts-new-rendering-engine-project-spartan/

Which IE engine will web driver use?

The new Edge engine. John Jansen in a comment at http://www.smashingmagazine.com/2015/01/26/inside-microsofts-new-rendering-engine-project-spartan/ said:

“We are definitely committed to the Edge engine with WebDriver. We are still working out details about how it must work, but it should never randomly switch between them for no apparent reason. I expect that you will be able to test your internet sites or intranet sites in ways the very closely mimic the actions a real user would see and do”.

Upon release will the browser still be called Project Spartan?

If history is anything to go by Microsoft Marketing or whoever names MS products has a consistent ability to remove cool names so probably not.

I am a site developer what does this mean for me?

You should continue to develop your sites and applications using current standards and everything should be marvellous.

Will Spartan be integrated as closely integrated with Windows as previous versions?

Personally I hope not & in an ideal world I would like to see it possible to run Spartan entirely off a USB stick. I have my suspicions that Spartan may have some deep links given it integrates with Cortana, Sharing of comments, Reading list etc but guess we will have to wait and see how this will work.

Additionally in previous versions of IE many products took dependancies on IE components e.g. Outlook utilized it for rendering HTML email. Having these dependancies may have slowed development as the IE team would have had to be careful not to break these applications reliant on these components.

It is also worth noting that as Spartan updates automatically updates should not be quite as big a deal as they were previously so maybe if there is a close Windows integration it wouldnt be such a problem.

What new HTML/CSS/JavaScript features will Spartan have?

Head over to staus.modern.ie for the most up to date view.

When will it be available to use?

You can watch the full preview event at http://news.microsoft.com/windows10story/. Note if you just want the Spartan related stuff fast forward to an hour in 🙂