Internet Explorer 11 of course contains improved support for new standards and API’s and it’s great to see Microsoft really stepped up their release cadence with IE 10 released only a year ago – can you believe there was about 3 years between IE 8 & 9 being released and 5 whole years between IE 5 & 6!

IE11 contains a heap of new features but for those of you with a short attention span my top 5 are:

IE 11 supported platforms
IE11 is of course supported on Windows 8 as part of the Windows 8.1 update but if you are running Windows 7 sp1 (and who can blame you as Win 8 has some er irritating quirks) you will still be able to use IE11 (although it’s not yet released at the time of writing so you er can’t quite yet).

It’s also worth noting there are some features that are not supported in Windows 7 due to OS limitations around graphics, security & device orientation. For a full list please refer to:  http://msdn.microsoft.com/en-US/library/ie/dn394063(v=vs.85)#unsupported_features

Completely overhauled F12 developer tools
The new F12 developer tools deserve an entire blog post(s) of their own so I will just summarize some of the main changes (you can go to http://msdn.microsoft.com/en-us/library/ie/bg182326(v=vs.85).aspx to read in more detail about these):

The below screenshot shows the new tools so you can see how different they are: 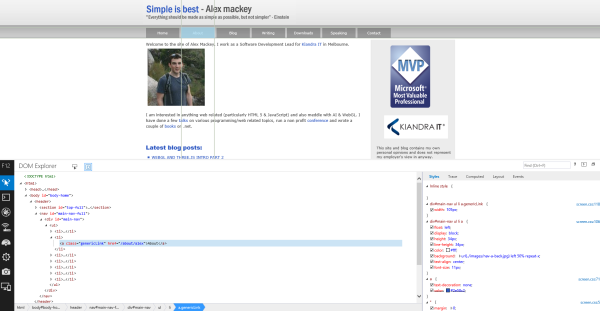 Synchronization
As long as you are using a Microsoft account (e.g. not just a local Windows account) then IE 11 will sync your browser history, typed URLs, favourites,  settings and credentials using Skydrive behind the scenes. The settings for this feature are a little hidden away under PC Settings, Skydrive, sync settings and enables fine tuning of just what’s synced.

Whilst we are discussing tabs IE 11 allows you to open unlimited numbers of tabs (you were limited to 10 in IE10) so you can have all your cat pictures open at once.

Standards & compatibility related changes
When IE 8 was released Microsoft introduced the concept of document modes to facilitate the rendering of older web pages. It is possible using a special http header or meta tag to tell IE to render a page using a particular document mode version. This feature would sometimes be useful when working with sites or CMS systems where you had little control over the html that was rendered and needed to ensure it worked with a particular browser version.

From IE 11 to help move things forward & provide the best user experience possible document mode should be considered deprecated (although will still currently work as of IE11). In IE11 edge mode is the preferred mode to render documents and contains the support for the standards. It’s very easy to tell IE11 that you want your page to be rendered using this mode simply add the html 5 doctype,

In the olden days some sites would use API’s such as navigator.appName & navigator.product to detect whether IE was accessing a page and serve a more basic version of a site (as older versions of IE had poorer standards support). The problem with this is that later versions of IE probably do support these features which can result in a poor experience  for users. IE 11 will now return “Netscape” when navigator.appName is called and “Gecko” for navigator.product. This also reflects whats specified in the HTML5 standard and what other browsers do so don’t think this is some Microsoft related hackary!

IE 11 removes support for a number of legacy api’s that you really shouldn’t be using anyway such as attachEvent, execScript & the most evil document.all. For a full list please refer to: http://msdn.microsoft.com/en-us/library/ie/bg182625(v=vs.85).aspx

Change to user agent string
On Windows 8.1 IE 11 will identify itself as:

Microsoft say they changed the user agent string to reduce the possibility of IE being incorrectly identified as an earlier version e.g. IE 10 identified itself as:

So I guess “compatible” & “MSIE” potentially caused some issues. MS say that if for some strange reason you want to detect just IE 11 (and you probably don’t really want to do this as you should be using feature detection)  then you can check for the presence of the string “Trident” (IE’s layout engine) and presumably should also use the version number once when IE12 is released.

Performance
IE 11 has improved performance with the SunSpider bench mark in July 2013 showing IE 11 is faster than Chrome 28, Firefox 22 & Opera 15 in the testing of some er fairly specific JavaScript scenarios. Of course in the real world browser performance is affected by a number of factors such as rendering, network requests and a number of other things so its tricky to say which is the quickest browser currently. The takeaway is that IE’s JS engine is very fast and at the least comparable with competitors offerings.

Other performance enhancements in IE 11 include:

It’s worth noting that using prerendered & prefetch could have some side effects with scripts & animations already having been run on page – you have been warned!

Security
Microsoft quote that an independent study by NSS lab also showed that IE11 blocked 99.96% of malware based on a 754 examples of malicious software which was better than other browsers that were tested which is awesome news. In previous NSS tests other browsers performed better in some other areas e.g. preventing phishing attacks (http://www.infosecurity-magazine.com/view/33645/there-is-no-single-most-secure-browser/) so read into this you will.

Windows 8 app related changes
I don’t have a Microsoft tablet related device so I can’t test some of these but apparently IE 11 supports:

Misc changes
Some other changes didn’t really fit in other sections but deserve a mention:

Potential issues
Of course every new release of software brings with it potential issues and IE is no exception. There has already been an issue with the rendering of Google’s search results that is now fixed but I think the following could potentially cause some headaches:

Summary
I really feel this release of Internet Explorer competes with offerings from competitors and will win some developers back with it’s much improved F12 developer tools. It’s also great to see support for the newer web technologies such as WebGL and Microsoft contributing to the community by proposing new standards such as IME.

It is frustrating to see that IE is often one step behind competitors offerings due to its slower release cycle. If anything I think this is due to Internet Explorer’s tight integration with Windows which only seems to be increasing with Windows 8 apps relying on IE components 😦

I really don’t think it a good idea that a browser is tied to an operating system so closely (although this has its advantages as well) and it will be interesting to see the direction the Internet Explorer team take with this in the future. I found Aaron Powell’s suggestion that Microsoft fork IE to test new features that get fed back into the main Internet Explorer an interesting read.

My only real gripe with IE now is that I would really like to see a good way to extend the browser – this is currently far too hard & badly documented.

But in conclusion IE 11 is a great release and a massive improvement on IE 10 with its improved development tooling.