I recently ordered a MXChip Microsoft Azure IoT Developer Kit to have a play with. 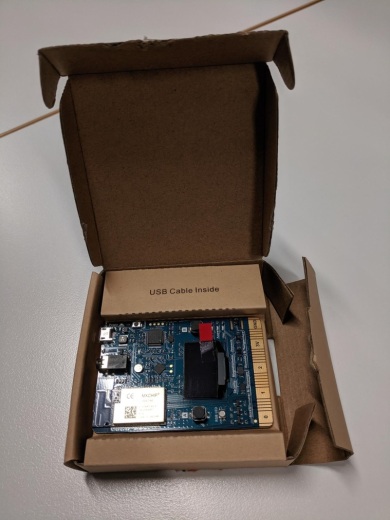 The MXChip Dev Kit is an awesome solution designed for prototyping IoT and cloud-based solutions and comes with a heap of functionality and sensors including:

Lots of goodies to play with without having to order and setup more components and sensors!

Setup
Setup couldn’t be easier and within about 10 minutes I had my dev kit sending data to Azure IoT hub (setup would have been even shorter had I typed in the WiFi password correctly – duh!). 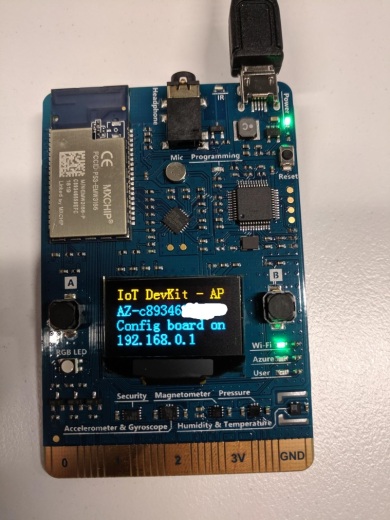 Development
So how do you create your own applications?

The kit is Arduino compatible and Microsoft has developed a heap of extensions, samples and tutorials for Visual Studio Code aimed at making it easy to develop, debug and deploy your own applications.

Setup was mostly painless although one of the extensions had some trouble installing and I couldn’t get the debug stuff that would allow me to see what the device was sending. I think this may be some USB driver issue and will require further fiddling..

One of the extensions gives you access to several tutorial projects and samples making it easy to explore the devices capabilities further.

I haven’t touched C++ for many years but the sample code was very readable and could easily be tweaked for your own projects.

Overall whilst the MXChip dev board is more expensive than some other options I was really impressed by all the functionality contained on the board, tutorial and sample support and ease of setup with Azure IoT hub.

If you want your own kit I purchased mine for about $90 AUD (American readers will find this considerably cheaper) from Core Electronics (https://core-electronics.com.au/mxchip-microsoft-azure-iot-developer-kit-pre-order.html).

It was great to have the chance to speak at NDC Oslo 2019 on the subject of developing solutions for everyone.

This was a very personal talk for me and a bit different to the more technical talks I generally focus on.

This is a talk about how we sometimes can exclude, make harder or even harm groups of people to use what we create software and how we can avoid this. 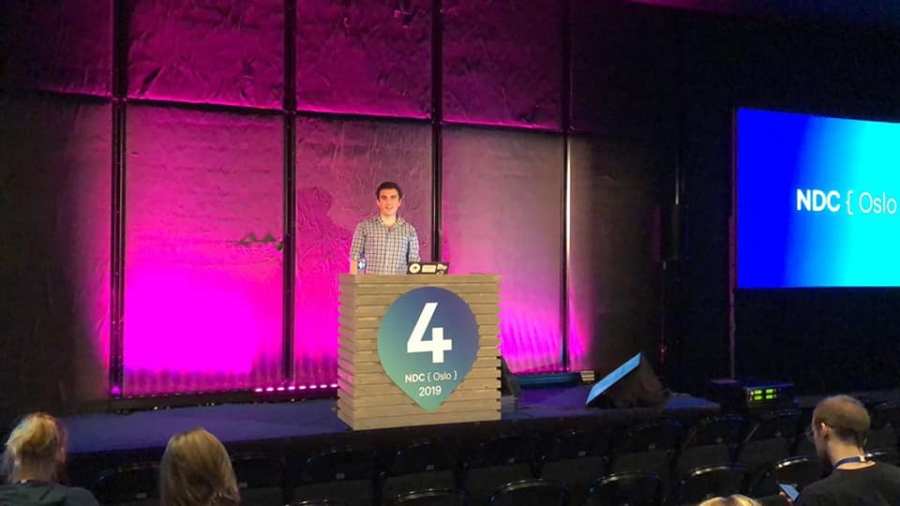 I found this one a challenging one to give given the subject matter which touches on everything from discrimination to hate groups.

For those wanting to know more about this area the talk was influenced by Sara Wachter-Boettcher’s book Technically Wrong. I also attended a few other talks at NDC Oslo that talk about this area such as Tess’s “We are the guardians of the future” and Sasha’s “Why our products and communities need our empathy” that i’d highly recommend watching when the videos are released.

The talk video will be available shortly but slides are online in the downloads section of my website/NDC Oslo 2019 folder.

My friend Jin of Alpaka gear kindly sent me a prototype of his kickstarter project the 7venMessenger bag.

The 7venMessenger bag describes itself as “the only bag you will need” and aims to be suitable for everyday work & leisure usage and also for a short weekend away.

When I was working for IT consultancies there was a regular discussion around what is the best laptop bag which is very relevant when you are frequently travelling.

I have always favoured Samsonite Backpacks as found them comfortable and hard wearing so was interested to see the 7venMessenger bag and how it compares.

Here’s a picture of my bag – note this is the prototype and Jin tells me there may be a couple of changes coming so the final bag may be slightly different: 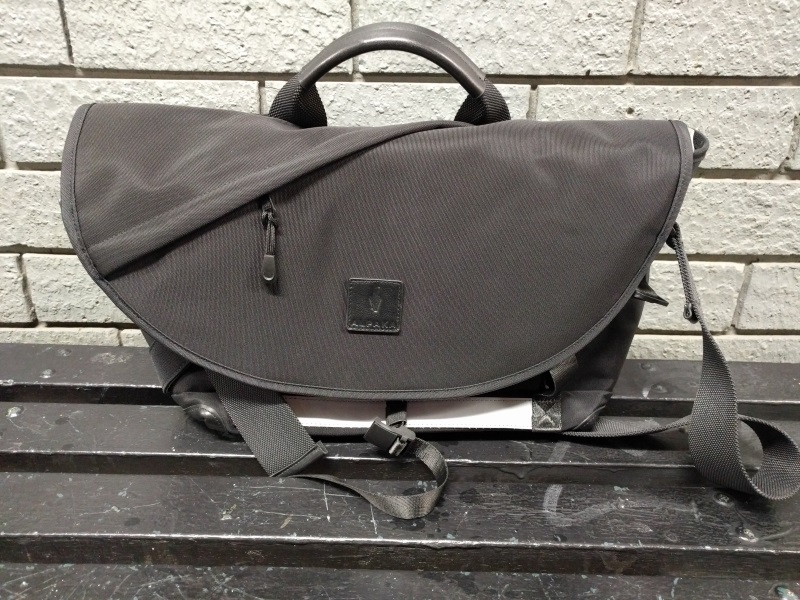 Well I am probably not the best judge of aesthetics (2 kids soon change your priorities to robustness of any clothing or gear) but the 7venMessenger certainly looks smart & wouldn’t be out of place at the smartest of soirees which er i’d never get invited to. The bag also receives a nod of approval from my wife (who knows a heap more about bags than I do) so this is a good sign.

The bag is constructed out of 1000D Ballistic Nylon – I don’t know what that is and what its bullet protection abilities are but it certainly feels tough, durable and looks smart. The bag is also water proof and easy to clean according to the website.

The bag feels reasonably light although is certainly heavier than some of my other bags. Its pyramid shape also means it stands on its own rather than collapses.

The attention to detail & quality on the bag is impressive. There is a massive amount of pockets, mesh compartments and storage (even on the strap!) which I love as there are always various cable chargers, USB sticks etc that need a storage location.

The bag can be worn in a number of ways such as over the shoulder, as a brief case or backpack – it also has a sleeve for fitting over a case handle that you might use at airports. The bag is very comfortable to carry using its leather handle and I find this is the preferred option standing on the train.

The bag has a magnetic clip on the front that looks like it would be released by pulling it up but is actually opened by sliding it sideways. It did confuse me at first and I spent a couple of minutes puzzled but I do like how the magnet pulls the clip together.

The bag is a decent size and easily holds my Dell XPS 13 inch in a padded section. I understand from Jin & his team that the final bag will hold a Macbook 15 inch comfortably. It does feel a little wider than the average messenger bag and I notice sitting on the train with it on my lap it expands slightly beyond my seat area but it’s not a huge issue.

In conclusion the 7venmessenger bag is an awesome product that I would highly recommend.

You can get this bag at a great price by backing the kick starter project at: https://www.kickstarter.com/projects/alpaka/7ven-messenger-the-only-bag-you-need what are you waiting for?

There can be few things more annoying (in terms of 1st world problems anyway) than having an application freeze and losing a load of work.

Losing work is annoying but what if the system performed a more important function such as managing your bank account or maybe even helping an aircraft navigate?

I posted an article on the Xero developer blog on public speaker for developers.

Check it out at: http://developer.xero.com/2016/02/public-speaking-developers/

I posted an article on gooroo.io about Visual Studio 2015 and the Rosyln compiler.

I posted on gooroo.io an article looking at what the actor model is and why you might want to use it.

I posted on gooroo.io about Brain Computer Interfaces.

Check it out at: https://gooroo.io/GoorooTHINK/Article/16423/Brain-Computer-Interfaces/20098

I posted on gooroo.io some thoughts on code review and pull request etiquette. Check it out at https://gooroo.io/GoorooTHINK/Article/16363/Developer-Etiquette–Code-Review-and-Pull-Request-Comments/19614

Each year I like to reflect on the previous year & set new goals.

This blog post doesn’t have too much relevance to anyone apart from me but I have found value in looking back at the previous year and setting myself new goals.

I’d normally try & write this at the beginning of January so it’s probably a good reflection of how busy I have been that i’m doing this early Feb.

This year was a transitional year for me learning how to be a dad to my new daughter.

As a new parent I certainly have a lot less time that I took for granted previously (and less energy) so had to cut back on a few things – this also made me much more selective about what I spent my time on!

Highlights for me of the last year included:

Microsoft surprised everyone this year with the release of a browser to replace Internet Explorer. Despite a few annoyances and omissions (an extension model was the big one for me as meant no password managers etc) Edge is a massive step forward.

This year I released another course for Pluralsight that has been well received called Edge for Developers concentrating on those changes of interest to developers and site owners.

I really enjoyed talking at a new technology focussed conference called BuzzConf on brain computer interfaces. It’s a mix of developer conference, hackathon & music festival.
We are going to be talking to the buzz conf guys about the possibility of running a DDD track at the next buzz conf so watch this space!

It was great to head up to the Gold Coast this year to talk about Microsoft Edge for Developers at Microsoft’s ignite conference.

Web Directions as always was a lot of fun and I enjoyed taking a deep dive into how numbers work in JavaScript.

It was great to reach the level of blackbelt in Taekwondo. I did feel that students were pushed quickly through the grading system & know I would have benefited from additional time spent on some aspects & was under no illusion that I have a long way to go to reach any level of mastery. 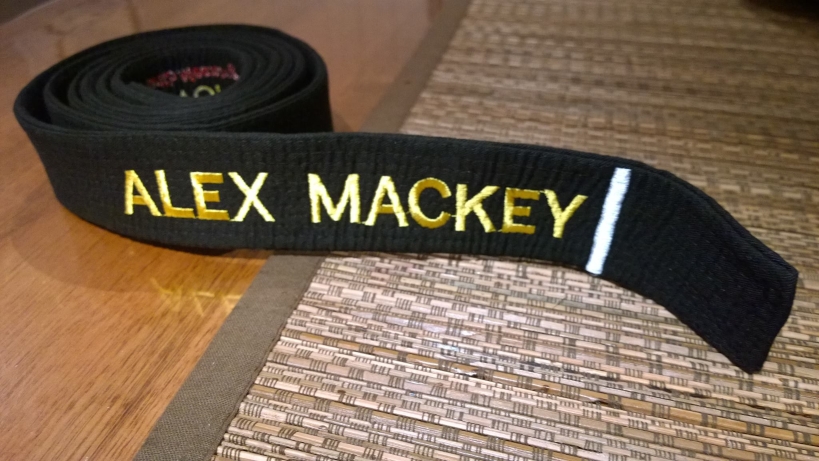 I was promoted to practice lead at my workplace – I really enjoy the opportunity amongst other things to focus on learning whats working and what is not working for our teams, helping teams work closer together, improving our processes, identifying educational opportunities & refining our induction and recruitment processes.

Visit Singapore and the UK

It was great to catch up with family and friends in the UK although flying with a 15 month year old was er not so fun.

After putting it off for some time we finally got around to selling our house & will very shortly be moving into a much larger house in a nicer suburb and around 1km from the beach!

I pretty much dedicated the last year to strength based training & worked with a great PT specializing in this area.

Weight training really rewards consistency & although I missed some of my original targets set last year (which were maybe optimistic) I was happy with the progress including a massive increase in deadlift.

One unexpected benefit I found was that heavy weights (especially 1RM squats!) can really test you psychologically and your state of mind can make a massive difference in terms of what you can lift. I believe that practicing something that scares you regularly helps you learn focus skills and be applied to other areas.

I made the following improvements 1RM numbers wise: 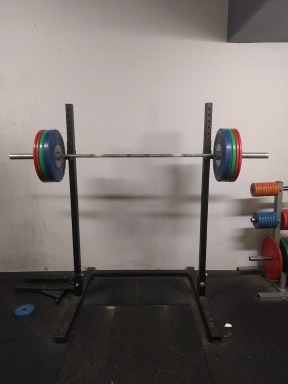 So for 2016 I have the following targets: